On January 21, 2016, more than eighty representatives from Member States, UN agencies, and civil society organizations gathered for the launch of a scientific open letter on the path forward for drug policy evaluation. 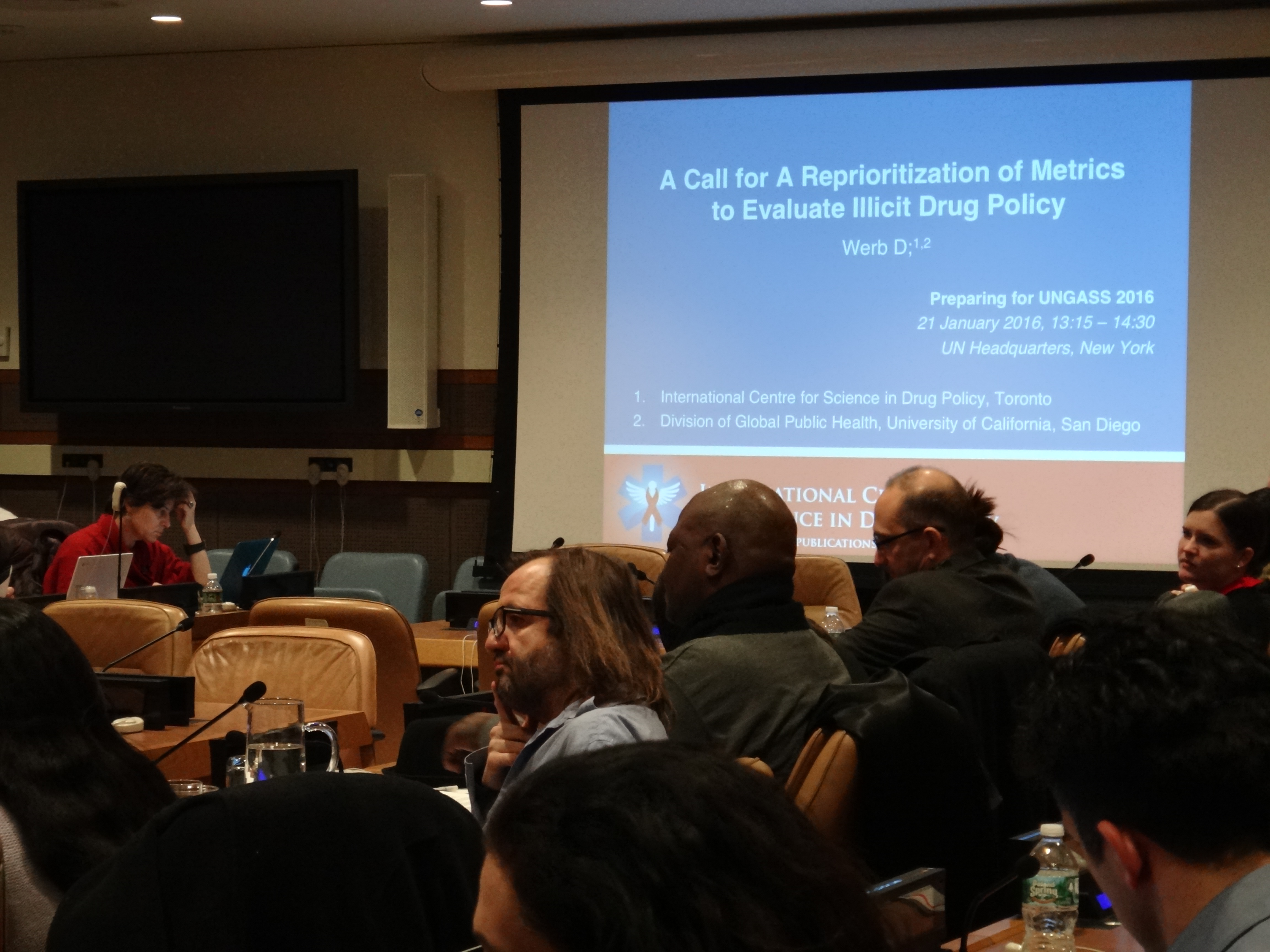 Titled, “Identifying Common Ground for UNGASS 2016: Rethinking Metrics to Evaluate Drug Policy,” the event hosted by the International Centre for Science in Drug Policy (ICSDP) at the United Nations Headquarters in New York City provided valuable expertise and guidance to Member States and UN agencies in the lead up to the United Nations General Assembly Special Session on Drugs (UNGASS) in April 2016.

The ICSDP’s open letter calls for a reprioritization of the metrics used to evaluate illicit drug policy. Co-authored by ten global scientific leaders, the open letter uses decades of scientific research to demonstrate that the small number of indicators currently prioritized by the vast majority of UN agencies and Member States – such as levels of illicit drug use and availability – fail to capture the complex ways that drug policy can impact communities. The open letter therefore argues for the adoption of indicators in the areas of health, peace and security, development, and human rights in order to provide a broader and more granular understanding of drug policy impacts. This, in turn, would equip policymakers with the data required to optimize outcomes and substantively control the world drug problem. 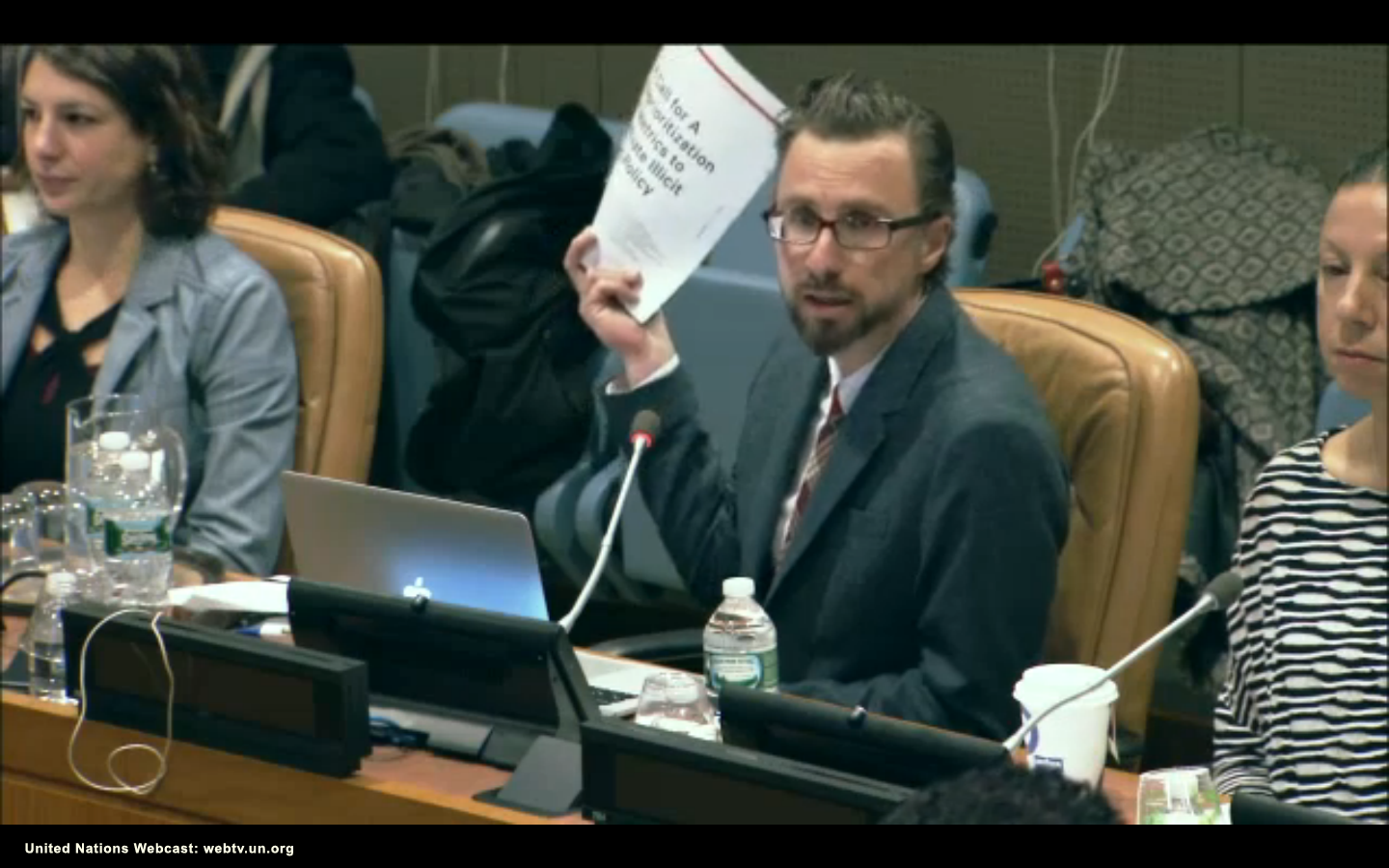 Dr. Dan Werb, Director of the ICSDP, focused his presentation on the development challenges that have undermined the successful implementation of Mexico’s drug policy reform. In 2009, Mexico decriminalized the possession and use of small amounts of drugs and legislated a system of diversion that would see drug dependent individuals triaged into drug treatment rather than prison. Despite one of the most progressive drug policies on the books, research measuring the effectiveness of the policy reform in Tijuana – conducted by Dr. Werb and colleagues at the University of California, San Diego – indicates that implementation has fallen short of expectations, as the number of arrests for drug possession in Tijuana have continued to rise despite the policy of decriminalization. According to Dr. Werb, this can be at least partially attributed to the lack of capacity of the Mexican state to provide members of law enforcement with adequate levels of pay, as well as training in the basic tenets of the drug policy reform. Problematically, although a cornerstone of the drug policy reform relies on increased coverage and accessibility of evidence-based addiction treatment, such as methadone maintenance therapy (MMT), resource constraints have resulted in a lack of adequate treatment scale up. Dr. Werb concluded his presentation by emphasizing that, as the Mexican case study demonstrates, a lack of resource commitment by Member States can seriously undermine drug policy goals and development indicators must therefore be captured in drug policy evaluations.

According to Dr. Kanna Hayashi, Research Scientist at the British Columbia Centre for Excellence in HIV/AIDS, evaluating levels of coverage for health services would be incomplete without also including indicators to assess quality, such as in the context of treatment for substance use disorders. Describing her research among people who inject drugs in Bangkok, Thailand, Dr. Kayashi noted that although Thailand added MMT to their universal health coverage in 2008, thereby increasing the accessibility of this health service, negative attitudes towards MMT by healthcare providers has led to suboptimal quality and rollout of this treatment modality. Research from 2011 found that the average dosage of methadone in Thailand was 30 milligrams, falling far below the 60-120 milligrams range recommended by the World Health Organization. As a result, 16% of those accessing MMT were also obtaining methadone illicitly and 19% reported syringe sharing. Dr. Hayashi stressed that if MMT were provided appropriately, these outcomes – which undermine efforts to reduce rates of drug dependence and to control the HIV epidemic – could have been avoided. The presence of compulsory drug detention centres is also an issue of suboptimal quality in treatments for substance use disorders. Research from 2011 indicates that, despite a lack of evidence that compulsory treatment for addiction is effective in treating drug dependence, 60% of people accessing drug treatment in Thailand were in compulsory treatment. Hence, as Dr. Hayashi’s presentation outlined, evaluations that do not include assessments of both treatment quality and availability will have limited utility in improving the health impacts of drugs and drug policy.

Dr. Daliah Heller, Clinical Professor at CUNY School of Public Health, provided concrete steps towards the adoption of health indicators by explaining how the majority of Member States could enhance existing data sets to evaluate the health impacts of their drug policies. For example, by collecting information on the presence of drug use as a contributor to death, existing death data in the United States could assess the impacts of dug use in a population. Dr. Heller also emphasized the importance of accompanying health indicators for drug policy with benchmarks for scaling up effective interventions. Monitoring and setting benchmarks for health interventions related to drug use, such as sterile syringe coverage, could help define government funding priorities and highlight disparities to ensure equity in the scale up of health services.

After explaining that the separation between the international drug control and human rights regimes has created an environment of systemic human rights risk in drug policy, Ms. Genevieve Sander, Human Rights Research Analyst at Harm Reduction International, described a series of steps that could be used to ensure the adoption of human rights indicators into drug policy evaluations. First, the specific human rights relevant to drug policy, such as the right to life, must be identified. Human rights standards should then be reviewed to determine the key characteristics of each right in the context of drug policy. A relevant key characteristic of the right to life, for example, would be the use of the death penalty for drug offences. Next, in order to design comprehensive human rights indicators for drug policy, structural, process, and outcome indicators must be included. Structural indicators can be used to shed light on the intent of a Member State. For the right to life , these may include the ratification of international human rights treaties relevant to protecting this human right. Process indicators indicate complicity in human rights violations, and in the example of the right to life, could include the number of convicted people facing the death penalty for drug offences. Finally, a relevant outcome indicator in the context of the right to life is the number of executions for drug offences in the last 12 months. Ms. Sander noted that incorporating all three types of indicators helps to reveal connections between actions and human rights outcomes, and thereby provides information on accountability. Ms. Sander concluded her presentation by emphasizing that all Member States are bound by their obligation in the UN Charter to respect, protect, and fulfill human rights. Adopting human rights indicators, targets, and benchmarks would allow Member States to better meet this obligation by reframing global priorities, focusing on more effective policies and interventions, and redirecting resources to where they are most needed.

Event attendees left with a greater understanding of the need to integrate scientific evidence into the development of a broader set of drug policy metrics, and were equipped with clear and demonstrable steps to better evaluate the multilayered impacts of drug policy on communities.

[WATCH A VIDEO RECORDING OF THE EVENT]